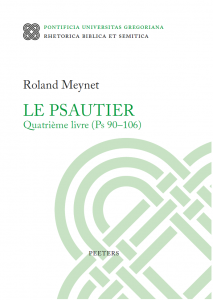 The composition of the fourth book is in no way inferior to that of the other four books already analyzed. Its three major sections each contain five psalms organized in a concentric manner; they are articulated by two short sections which constitute the foci of the ellipse that the whole book draws.

The extreme sections respond to each other. The first (Ps 90-94) describes “the fate of the sons of Adam”, the last (Ps 102-106) “the fate of the sons of Israel”. All are subject to the law of human misery. They are like the grass that blooms in the morning and withers and dries up in the evening; to the decay is added sin. The Lord, the refuge of men from generation to generation, saves men by satisfying for long days those who fear him and by assuring his faithfulness to their sons from age to age; in spite of their repeated infidelities, God does not tire of forgiving them.
The central section (Ps 96-100) stands out from the rest of the book, which it overshadows. All peoples are called to come to Jerusalem to worship the King of the universe and to bless the one who has saved the chosen people from all the families of the earth. Carried by the promise of the one God and by the hope of the one people, this invitation is situated on the horizon of eschatology, never reached but always desired.

The foci of the ellipsis (Ps 95 and 101) constitute the key to the reading of the book. The first focuses on a wish addressed to man: “Today if you would only listen to his voice…” (Ps 95:7). The second asks God a question: “When will you come to me? (Ps 101:2). Thus, the whole of the fourth book is caught up in this tension between the desire of God and that of man, each going to meet the other, in a “today” whose fragility places every man between the morning when the grass flowers and the evening when it dries up, between the time of the fathers which the last section evokes at length, the time of sin and forgiveness, and the time of salvation and of the end which the central section contemplates.