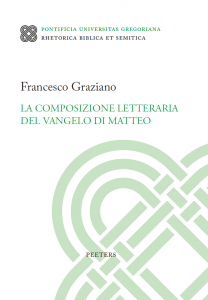 Commentators have always believed that the First Gospel presents an organic structural project, but they have interpreted it in a varied range of hypotheses. The help of biblical-semitic rhetoric, attentive to the composition of biblical texts starting from the laws of literary expression typical of the Semitic cultural area, tries to clarify the confusion raised by the different criteria used, often external to the text.

The Gospel of Matthew is well woven into seven sections, recalling the Jewish Menorah, but also the Johannine image of the Risen One among the seven candlesticks (Rev 1:12-13), and therefore of the presence of God in the midst of his people (the Emmanuel of Mt 1:23; 28:20).

A Prologue (1:1-17), the genealogy of the Messiah Jesus, and an Epilogue (27:62-28:20), the events of Easter morning, are the outermost sections: they launch and fulfill the fundamental threads of the Gospel, the messianic descent (promised to David) and the opening of the New Covenant for Israel and the Nations (the blessing promised to Abraham). Two binding sections, the Discourse on the Apostolic Life (Mt 10) and the Discourse on the Ecclesial Life (Mt 18) are the fires of an elliptical composition: they contain the instructions that the Messiah left to the community, so that it may carry out its mission from the first announcement until the parousia, that is, “to make disciples of all the nations” (28:20). The three major sections, each of which encompasses the other teachings of Jesus (the Sermon on the Mount, the Sermon in Parables and the Eschatological Sermon) are presented as the living didactic deposit from which the “disciple-scribe”, in his mission of generating new disciples, will know how to “bring forth new and old things” (Mt 13:52), carrying on the Covenant sealed in the life offered by the Servant and Son of God.

The proposed analysis is a first analytical look at the rhetorical composition of the Gospel, hoping that the study of the composition, in its different levels of architecture, will give the reader a key to unlock its meaning.