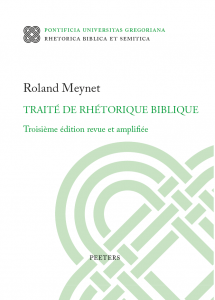 This book is the fruit of a long history that goes back at least to the middle of the 18th century and, on the part of its author, of some fifty years of research and analysis of texts, both Old and New Testaments, and sets out in a systematic and thorough manner the principles of biblical rhetoric.

Belonging to the cultural area of the Semitic world, it differs from Greco-Latin rhetoric, of which the modern West is the direct heir. However, it does not only apply to texts written in Hebrew or Aramaic, but also to the Greek books of the Old and New Testaments. Knowledge of the laws of this specific rhetoric is indispensable for a better understanding of the biblical writings.

The treatise is divided into three parts: Composition, Context and Interpretation. In the first part, the relationships between all the linguistic elements used to construct the texts are explained, followed by the successive levels of their organization, then the figures of composition and finally the rules of rewriting. The part devoted to the context is concerned first with the intratext, and even more with the intertextual relationships, before the function of the center of the concentric compositions is studied and the rules of rewriting for the synoptic texts are proposed. The third part first shows the usefulness of biblical rhetoric for the establishment of the text, its translation, its divisions and its punctuation. Then the five hermeneutical rules that allow the interpretation of the texts from their composition are exposed. Then the role of intertextuality, which is often decisive in clarifying them, is discussed. The section ends with a reflection on the gift of interpretation.

This third edition has been lightened of its extreme chapters: the “History” is available on the site of the RBS, the “Perspectives” are now partly outdated and largely better known; several examples which were not indispensable have also been saved. On the other hand, the volume has been enlarged by the presentation of recent discoveries and by in-depth studies – in particular of intertextuality – which were necessary for pedagogical reasons.