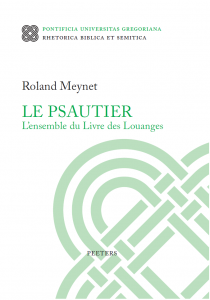 Each of the five books of the Psalter has proved to be composed and well composed. The same is true of the Book of Praises as a whole. The procedures of biblical rhetorical analysis have made it possible to show this, despite the shortcomings of a research that could hardly be based on many previous works.

According to tradition, the five books of the Psalter correspond to the five books of the Torah. In the Torah, God speaks to man through the wonders he accomplishes in his favor, and then through the law he gives him; thus he educates him, he “teaches” him, according to the meaning of the word tôrâ. In the Psalter, it is man who speaks to God, who tells him of his misfortunes, who calls on him for help, who also praises him for his salvation.

In oppression, the psalmist sometimes claims his innocence, but God makes him aware of his sin. Then he confesses his faults and asks for forgiveness. Last but not least, he realizes that he is unable to understand the law, to see the path that leads to life. And he asks, with insistence, to be instructed in it. As early as the first book, the psalmist pleads: “Make your ways known to me, Yhwh, teach me your paths! (Ps 25:4). And he repeats it over and over again in the immense psalm of the Law: “Teach me, Yhwh, the way of your decrees […] Make me understand and I will keep your law” (Ps 119:33-34). Thus the law engraved on stone will be written on his heart of flesh.

This is the most visible point of contact between the Torah and the Psalter. Moses said: “Listen, O Israel, to the laws and customs which I speak in your ears today” (Dt 5:1) and God says in the heart of the Psalter: “Listen, my people, and I warn you, O Israel, if you would listen to me…” (Ps 81:9). Unable to listen and understand, Israel asks to be taught the Torah. The Psalter is the healing remedy for the deafness that prevents one from hearing the Word of God, for the blindness that prevents one from seeing the path of life. Thus begins to take shape the new covenant announced by the prophets of the exile, when God will give man a heart of flesh on which he will write his law.