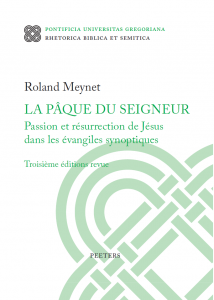 The Gospels represent the heart of the New Testament. The account of Jesus’ Passion and Resurrection with which they end are in turn the rock on which the Gospels are built. This shows the importance of these texts.
The four “sequences” of the Passover – Testament, Judgment, Execution and Resurrection – are here analyzed and interpreted according to the laws of composition proper to biblical texts, those of Semitic rhetoric. Thus, great frescoes take shape where each episode takes shape and meaning in its relationship with the others.

The study of the biblical context allows us to see how the characters of the Passover are situated in the line of the great figures of the First Testament. Jesus is presented as the new Adam, the righteous Abel, the Bridegroom of the Song of Songs, the Servant as foretold by the prophet Isaiah and the Psalms. Alongside the woman with the perfume of Bethany, the new Eve and Bride of the Song of Songs, other figures also appear, such as Cain, murderer of his brother.

The study is also “synoptic”: at the main levels of organization of the text, it compares first Matthew and Mark, then Luke and the first two gospels. This synoptic comparison does not stop at stylistic details, but focuses above all on the compositional phenomena that give each their specific architecture. This is essential to grasp the respective message of each evangelist.

Thus appear three portraits of Jesus, similar and different, complementary. For Matthew, who writes in and for communities made up essentially of Jews who have become disciples of the Risen One, Jesus is presented in the guise of Isaiah’s Suffering Servant, who is revealed at the end to be the elder of a multitude of brothers. For Mark, who addresses a church where Jews and non-Jews mingle, Jesus is the Master of his disciples, who has become Lord of the universe by his resurrection. Finally, for Luke, the evangelist for Christians of pagan origin, Jesus is portrayed as the King of Israel, the Christ of God announced by the Jewish Scriptures.
This new edition is enriched by a double appendix on “Circumcision and the Cross of Christ”, and on “Circumcision, the Cross of Christ and the Consecrated Life”.