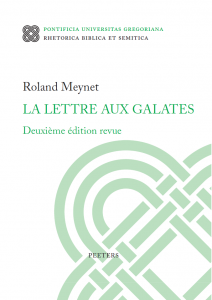 So dear to Luther, who called it his “little bride”, the Letter to the Galatians is, despite its brevity, a major text, decisive for the Christian faith.
Many believe that this letter was written in the heat of passion. It has even been said that the rhetoric is so fiery that it is “red hot”. It would therefore not be appropriate to look for a rigorous order in this occasional writing. Others have retorted that it is not an e-mail after all!

For more than fifty years the Letter to the Galatians has been the privileged field of application of the rules of classical Greco-Latin rhetoric to biblical texts. Some people think they can recognize in it a judicial type of writing, others a deliberative type, still others a demonstrative type; not to mention those who lean towards ancient epistolography.

The present commentary starts from another presupposition. Although born in Tarsus, where schools of rhetoric flourished, Paul was first and foremost a Jew, trained in Jerusalem where he says he grew up at the feet of Rabbi Gamaliel. It is therefore undoubtedly better to seek to discover the composition of his letters not in Athens, but in what was the substance of his culture, the Bible, with the specific laws which characterize it.

Thus, the essential thesis of the Letter, the “proposition”, is not found at the beginning of the letter, as classical rhetoric would have it, but right in the middle of the central section, as the keystone, and therefore the reading, of the whole of the writing. In this, Paul follows one of the most fundamental and best established laws of biblical and Semitic rhetoric.
The interpretation of the Letter, supported also by the study of the biblical context, is consequently significantly renewed.