This is the English translation of the first volume of the Commentary on the Psalms, published in 2018: 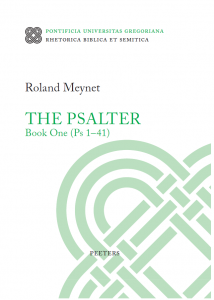 Like the fifth book, the first book does not merely juxtapose isolated prayers; the forty-one psalms constituting it form a highly elaborate architecture, in accordance with the principle of self-similarity of fractals, or following the procedure of mise en abyme.

The book is organised as its second section and even more as the third one. The first side of each of these two sections features the king’s enemies whose sin consists in persecuting him “without reason”, with the psalmist claiming his innocence and faithfulness to the Law. Then the centre of these sections switches to the second side, where the psalmist becomes aware of his own sinfulness and inability to keep the Law; he needs to be “instructed” in the “ways” of God, who will forgive him his sins and imprint his Law “in his heart”. It therefore acts as a transition from the first covenant, the Mosaic covenant of Sinai, to the new covenant, the one announced by the exilic prophets, which is based on the forgiveness of sins, on the inner knowledge of the law and on the universality of salvation that will attain all nations.

This same shift can be seen throughout the book. Its first section (Ps 1–18) entirely occupied by the threat posed to the psalmist by his sinful enemies, while the next two sections (Ps 19–25 and 26–41) make the transition from the old covenant to the new one. A similar changeover was already taking place in the central subsection of the second section (Ps 20–24) and in the third section (Ps 32–37), always in the same direction.