Contrary to appearances, the Book of Qohelet is not disjointed and is not a fabric of contradictions. Its composition makes it possible to highlight the tensions that animate it. 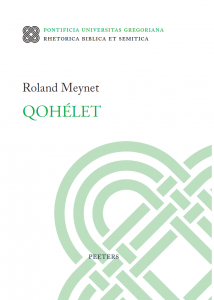 Two leitmotifs underlie the whole book, that of “fog” and that of “joy”. Fog is ultimately that of death, while joy is that of life. It is not possible to reconcile them. The question is how to articulate them. The refrain of the fog is very frequent in the first side of the book, but once past the center (7:1-14), it almost disappears only to reappear at the last moment. On the contrary, the seven occurrences of the refrain of joy, in eating and drinking, and in the work done, regularly punctuate in crescendo the whole surface of the book. This double contrary itinerary of fog and joy manifests how life ultimately prevails over death.

No more than anyone else, Qohelet knows nothing of what happens to man after his death. But the only thing he knows is that “the breath returns to God who gave it” (12:7). It is usually said that at that time in Israel there was not the slightest belief in what was later called “eternal life”. However, to think that such a statement is just a figure of speech, signifying almost nothing, would be to give little credence to Qohelet’s final words, which sound like a testament. Man’s eternal home is not his grave.

The figure of Abel, whose name means “vapour/fog”, dominates the whole book. The Genesis account does not record a single word that Abel uttered during his life, nor one that was spoken to him. After his death, it is not said that his breath returned to God. It is said that his blood cried out to God from the ground where it was shed. It is not forbidden to think that Qohelet lent him the voice to make his cry heard by our ears.